This was the New Year's Eve Jam...nae New Year's day Jam in the Antipodes, so I wanted to start and finish the show with a bit of a 'kick.' Enter Ananda Shankar. Who? I hear you cry....He was the (possibly, depending on who you talk to) lesser known nephew of Ravi Shankar. Whilst Ravi remains well known for his readings of Indian classical music, Ananda took the ball and ran with it, so to speak and developed ways of interpreting both modern music and Indian standards into that funkiest of subgenres, 'Sitar Rock...' So...the playlist:-

Jumpin' Jack Flash by Ananda Shankar (Reprise Records 1970) As is often the case, solo artists have some very very imaginative album titles, and this was no exception...From the album, 'Ananda Shankar,' some might say very much of its time but nonetheless something you could mosh to and feel full of Eastern promise at the same time...Well it was new year's eve after all!! The connection is one of those I've had to delve for...but there are no rules on this show. Ananda Shankar's 'Raghupati' was one of a plethora of songs used on the game, 'Grand Theft Auto' (regrettably I haven't played it to find that out..), as is a shed load of music by Giorgio Moroder...

Utopia Me, Giorgio by Giorgio Moroder (Oasis Records 1977) Possibly better known as the producer who had Donna Summer making some obscene publications in the studio with incredible results. He pioneered disco records that, instead of having banks of orchestras on, were minimalist in that they featured only synthesizers, but filled out the sound to make the listener feel like a sonic millionaire!! Indeed, an electronic Utopia or sorts, just keep fingers crossed you don't get a power cut...The next connection was easy... 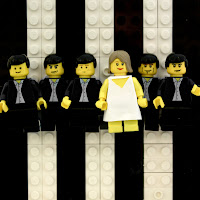 One Way Or The Other by Blondie (Chrysalis Records 1978) This number, guaranteed to break the ice at parties, was allegedly written by Debbie Harry and the English member of Blondie, Nigel Harrison about some stalker or other that Debbie had. What makes me smile is the cover to the album as you can see above. Look at Blondie and then look at the other fellas. They're grinning like Muppets and Debbie looks very sssssultryyyy...They were apparently very unchuffed about this, were the blokes, as the pictures had been taken individually and they had no idea which would be selected! Debbie thought it was fine, though...Blondie's first album, Blondie (more imagination personified!) connected us via Producer Richard Gottehrer, to...


I Want Candy by The Strangeloves (Bang Records 1965) This was a marketing gimmick gone wrong. This was a fictional group of blokes with rather serious names, Bob Feldman, Jerry Goldstein and Richard Gottehrer, who were very Tin Pan Alley kind of folk, who wrote a string of hits, decided it would be more aesthetically pleasing if they posed as 3 ex Sheep Farmers from Australia called Niles, Miles and Giles Strange....Good song though...famously covered by Bow Wow Wow...I was really scraping the barrel for connections to the next one...I took the link from Richard Gottehrer back to Blondie, who just happened to be on the German music programme, 'Muzik Laden,' in 1980 (as were numerous other folk!!), as was

You'll Always Find Me In The Kitchen At Parties by Jona Lewie (Stiff Records 1980) Another minimalist classic. Jona Lewie had a fairly chequered career up to 1980. That was his year really, with this gem about cuisine centric party goers and Christmas song, Stop The Cavalry. Seeing as it was New year, I thought this best...see also some recent IKEA Ads in the UK where this was played in its entirety. Jona Lewie: Still selling flat pack furniture even 32 years later...Stiff Records connected us, quite comfortably to...

Lucky Number by Lena Lovich (Stiff Records 1979) This was one of those artists (Kate Bush was another one) that my Grandad, God rest his soul, would mutter something that sounded remotely like, 'Mother, the shell suit doesn't fit,' when she came on TV and then say how she might possibly beat you up if you met her. The most memorable thing of all was the hook ooo ooo ooo ooo...smashing stuff!! Lena almost covered 'I think We're Alone Now' but left it for Tiffany to get her mits on some 9 years later. That song was written by...


(Great cover, you could almost be there...)

Mony Mony by Tommy James and The Shondells (Roulette Records 1968) This song was one of those happy accidents. Legend has it that Tommy, who could turn out a tune or two, was really up against it for a new song. He wanted to call it something like shabidabidoo or some such but fortunately thought such titles were somewhat wanting. He was atop a tall New York hotel and was about to fling his pen off and possibly the music he'd written too, in a rage akin to throwing all your toys out of a pram...and then...that was it...he was opposite the Mutual Of New York building, which had it's initials on the top in neon red letters MONY and that was that....and to think, if he'd looked the other way, it could have been called 'The Teddy Roosevelt Hotel...' Tommy also wrote 'Crimson and Clover,' which was covered by:-
I Love Rock And Roll by Joan Jett and The Blackhearts (Boardwalk Records 1981) This was a ssong originally produced by The Arrows in 1975. The single flopped due to an almost total lack of promotion. Somewhere between then and 1981, Joan Jett heard it and decided that her trusty Blackhearts could add some power chords and hey presto...hitsville...A song called 'Indian Giver,' that Joan et al covered was written by a one Mr....

Montego Bay By Bobby Bloom (L&R Records 1970) Lovely stuff! It's sad that Bobby was prone to being clinically fed up, but the arrangement of this tune is wonderful. The version herein contains some contra band Rogers and Hammerstein, in as much as in the original recording session he spontaneously broke into, 'Oh! What A Beautiful Morning!' In a thrifty exercise to p[revent any royalties going in that direction, it was hastily cut from the end..but here it is in its entirety!! The next Connection? The cover of the NME!!

One Love/ People Get Ready by Bob Marley (Island Records 1977) Spreading the love...technically a Curtis Mayfield/ Bob Marley collaboration, this was recorded in England whilst Bob was on the run from some nasty folk that had taken an attempt at his life in Jamaica. Bob was unphased saying, ''Those guys trying to make the World a worse place aren't going to take a day off, so why should I...?' The connection was film director Saul Swimmer via Bob and via Ananda's uncle, Ravi Shankar to...

The Streets Of Calcutta by Ananda Shankar (EMI Records 1975) This is just....ace! another Far Eastern mosh!! A great way to end the year...Get down on it!!